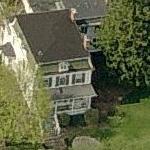 By kkeps @ 2009-03-28 20:11:16
@ 42.892549, -77.278947
Canandaigua, New York (NY), US
This graceful two-story frame house with mansard roof and detailed ornamental trim was, according to oral traditions, a station on the Underground Railroad routes for both Rochester and Pultneyville. In emergencies, the fugitive slaves descended through a trap door in the dining room to a dry cistern in the basement. The trap door was near the north wall of the dining room and was covered by the dining room table. Most of the escaped slaves arrived in Canandaigua either from Naples (probably with a stopover at the Cobblestone Farm) or from Geneva on their way to Canada.
Links: www.waymarking.com
1,227 views