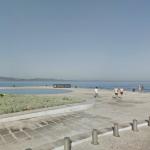 By cro4la @ 2012-09-26 08:15:19
@ 44.117571, 15.220532
Zadar, Croatia (HR)
It may be that the loveliest inscription of Zadar's exceptional sunset was written by the famous Alfred Hitchcock. On the occasion of his visit to Zadar, in May 1964, while observing the luxurious game played by the sun the Maestro said: »Zadar has the most beautiful sunset in the world, more beautiful than the one in Key West, in Florida, applauded at every evening.« From room 204 of the former Hotel Zagreb, the great film master of suspense, enthusiastic and overcome by this notion, tried to catch the beatuy of the sunset with his camera.

His visit of the city and his words are a memento to the Sun that never dies while casting its last rays. As does not die the memory of the great Hitch's visit. The following morning, after having slept and rested, Hitchcock stood in front of the lens of the famous Zadar photographer, Ante Brkan. On Brkan's photograph »Alfred Hitchcock in the Sky« you can recognize the satisfaction of the classic of film art. »Drama is life with the boring part left out« Hitchcock said on one occasion. He could have said the same for all the drama of the suset, symbol that has always remained in Zadar's company.
Links: zadar.travel
1,043 views