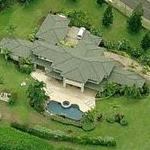 By Champion3 @ 2010-07-14 23:55:45
@ 21.00758958, -156.6469195
Lahaina, Hawaii (HI), US
Aflred J.R. Villalobos is a former CalPERS board member and ex-deputy mayor of L.A. CalPERS, the California Public Employees' Retirement System, the largest public pension fund in the United States with $179.2 billion in assets. He later made $53 million dollars in fees from Wall investment firms who wanted to tap CalPERS' funds. He is being investigated by the state attorney general and the SEC for accepting bribes from well-connected private equity and real estate managers in exchange for multi-million dollar investments from CalPERS.
2,098 views