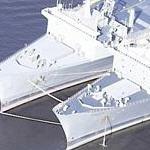 By kjfitz @ 2006-04-08 14:44:48
@ 36.865694, -76.315955
Norfolk, Virginia (VA), US
The Fast Sealift Ships, vehicle cargo ships that are nearly the length of an aircraft carrier, are the fastest cargo ships in the world. Combined, all eight Fast Sealift Ships can carry nearly all the equipment needed to outfit a full Army mechanized division. The Navy maintains these ships in an inactive status pierside at an average cost of $4 million dollars per vessel per year. The ships can travel at speed of up to 33 knots and are capable of sailing from the US East Coast to Europe in just six days, and to the Persian Gulf via the Suez Canal in 18 days, thus ensuring rapid delivery of military equipment in a crisis. Along with her sister ships, Algol was extensively employed carrying combat vehicles and other cargo to the Persian Gulf area during the 1990-91 Desert Shield/Desert Storm operations. Fast Sealift Ships are named after supergiant stars.

Fast Sealift Ships are roll-on/roll-off and lift-on/lift-off ships equipped with on-board cranes and self-contained ramps which enable the ships to off-load onto lighterage which anchored at sea or in ports where shore facilities for unloading equipment are unavailable. The vessels are specially suited to transport heavy or bulky unit equipment such as tanks, large wheeled vehicles and helicopters.
Links: www.globalsecurity.org
2,092 views