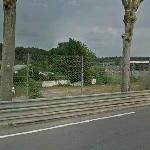 After beginning his career in karting, Simonsen moved to cars in 1999, winning the Danish Formula Ford Championship. He raced in Formula Palmer Audi in 2000, before moving to German Formula 3 and Formula Renault 2.0 UK in 2001.

Simonsen moved to sports car racing for 2002, driving a Ferrari 360 for Veloqx Motorsport in the British GT Championship. He began racing in Australia in 2003, driving in the Australian Nations Cup Championship, and in the Sandown 500 and Bathurst 1000 V8 Supercar events. Simonsen's best Bathurst result came in 2011, when he finished third for Kelly Racing driving alongside Greg Murphy. Simonsen won the Australian GT Championship in 2007 and finished second in 2008.

Simonsen placed fourth in the 2007 Le Mans Series season, in a partial season driving a Porsche 911 GT3 for Virgo Motorsport, which included a GT2 class win in the Nürburgring 1000. He drove Ferraris for Team Farnbacher in the Le Mans Series and various international series from 2008 through 2011. During that time, Simonson won the GT2 class at the 2009 1000 km of Okayama with Dominik Farnbacher and the SP7 class in the 2010 24 Hours Nürburgring with Farnbacher, Leh Keen, and Marco Seefried. He participated in the 24 Hours of Le Mans seven times between 2007 and 2013, finishing on the GT2 class podium twice: third in 2007 and second in 2010.

Death:
Within the first ten minutes of his seventh Le Mans Simonsen spun his No. 95 Aston Martin Vantage GTE at the Tertre Rouge corner and impacted the crash barriers on the outside of the corner. He was extricated from the car, reportedly conscious, before being taken to the on-site medical centre where he succumbed to his injuries. His death was the first such racing incident during a 24 Hours of Le Mans race since Jo Gartner died in a 1986 crash, while French driver Sébastien Enjolras died more recently in a pre-qualifying session accident in 1997.

Race officials raised a Danish flag at half mast over the circuit's podium during the race in honor of Simonsen. Fellow Danish driver Tom Kristensen won the race overall and dedicated his team's victory to the memory of Allan Simonsen.