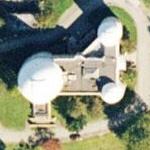 The observatory is located four miles north of downtown Pittsburgh, Pennsylvania at Riverview Park. It was founded on February 15, 1859 in the city of Allegheny, Pennsylvania (incorporated into the city of Pittsburgh in 1907). The observatory's initial purpose was for general public education as opposed to research, but by 1867 the revenues derived from this had receded. The facility was then donated to the Western University of Pennsylvania, today's University of Pittsburgh.

On November 18, 1883, the first day of railroad standard time in North America, the Allegheny Observatory transmitted a signal on telegraph lines operated by railroads in Canada and the United States. The signal marked noon, Eastern Standard Time, and railroads across the continent synchronized their schedules based on this signal. The standard time that began on this day continues in North American use to this day.