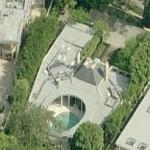 Allen Grubman also has a daughter, publicist Lizzie Grubman, who received widespread news coverage when she drove her SUV into a crowd of people outside a nightclub.
Links: realestalker.blogspot.com
4,089 views