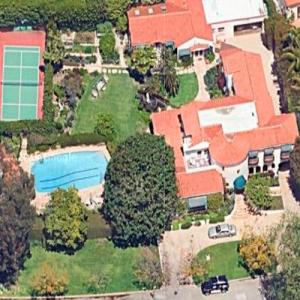 Allen led the Hughes Aircraft Company’s growth to the forefront of the country’s defense electronics, telecommunications, and space industry. After retiring in 1985, he continued to contribute to the profession as a lifetime trustee at the University of Southern California (USC).

Born July 25, 1919, in Springfield, Ohio, Allen enrolled at Harvard University at age 16. In the summer between his freshman and sophomore years he worked as a ranch hand at his cousin’s ranch in Montana, an experience he credited with changing his life and fostering a lifelong love of the outdoors and horsemanship.

While working at the Guggenheim Aeronautical Laboratory at Caltech, Allen helped design a new supersonic wind tunnel, the first of its kind in the country. Later, he produced the calculations that led to the development of delta wing theory, which predicts the aerodynamics of supersonic aircraft and continues to be applied in the production of modern aircraft. This work formed the basis for his landmark PhD thesis, “Supersonic Wave Drag of Thin Airfoils.”

When the United States entered World War II Allen received orders to report for duty, but shortly before he was scheduled to leave for flight training he learned that he had been discharged from the Army Air Corps. Unbeknownst to him, von Kármán had written directly to the secretary of war, making the case that Puckett would be much more valuable to the war effort by continuing his research at Caltech.

After Allen completed his PhD in aeronautics in 1949, Ramo recruited him to build the aerodynamics department at the fledgling Hughes Aircraft Company. He joined the firm that year and, over the course of his nearly four-decade tenure at Hughes, rose steadily through the ranks, eventually becoming president in 1977 and CEO and chairman of the board in 1978.

By now Allen had shifted his focus to the burgeoning field of electronics and was a primary force in establishing the company’s status as the country’s leading defense electronics supplier. Hughes equipment could be found on virtually every air, land, sea, and space vehicle in the US and NATO inventory and in every air defense and communications installation. The ubiquitous laser was pioneered in the company’s research laboratory.

Allen also promoted the development of the first geosynchronous satellite, which relayed live television coverage of the 1964 Tokyo Olympics, marking the first time the Games could be seen in real time on several continents. He encouraged the company’s rise to the forefront of worldwide commercial satellite sales. And he oversaw Hughes’ deployment of the country’s largest private fleet of satellites, providing service that enabled the growth of the US cable television industry. (Hughes’ later creation of DIRECTV was a natural extension of this effort.) For his crucial contributions to geostationary communication satellites Allen received the National Medal of Technology, the nation’s highest honor for technological achievement, in 1985.

By the time Allen retired in 1987, Hughes had grown to more than 80,000 employees and was the largest employer in California. It had also become one of the largest technical forces in the country, employing 20,000 engineers. Under Allen’s guidance, the company established graduate and undergraduate fellowships at major engineering schools across the country. The Hughes Fellowship Program was the largest program of its kind, and many of us in the Academy are beneficiaries.

An avid competitive yachtsman and cruising sailor, Allen participated in regattas around the world and was regarded as a legend in the sailing community. He brought his technological expertise to this arena as well, helping to develop some of the first computer programs for navigation and performance analysis.

He loved the outdoors on land as well. Over the years, he hiked extensively in the Sierra Nevada and the Swiss Alps. He was particularly proud of his summiting of California’s Mt. Whitney via the difficult “mountaineer’s route.”
Links: www.nap.edu
319 views