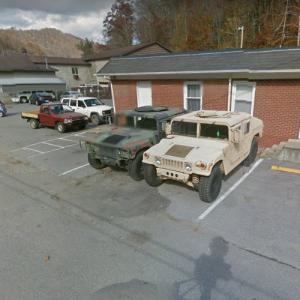 By Carrera @ 2018-05-26 02:24:30
@ 37.6920601, -81.6335989
Oceana, West Virginia (WV), US
HMMWV is the acronym for "High Mobility Multipurpose Wheeled Vehicle", and is often known as "Humvee" for short. The first Humvees went in service in the U.S. Military in 1984, and its usage had been spread to many other countries around the world over time. Its role was to fill in the duties done by the original military Jeeps along with many other vehicles. It subsequently became the inspiration of the formation of General Motors's ill-fated Hummer marque for SUVs. At least 281,000 units of these 5,200-5,900 pound military trucks powered by either a turbo-diesel or a petrol-powered V8 engine were built and is still in production today. However, the JLTV (Joint Light Tactical Vehicle), built by Oshkosh, is planned to replace the Humvee after a 10-year design process with production finally starting in 2016.