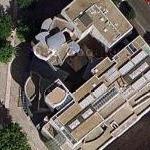 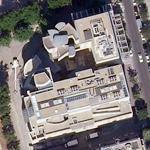 By kjfitz @ 2006-05-01 22:31:31
@ 48.83703, 2.382703
Paris, France (FR)
The American Center’s announcement in the mid 1980’s of their plans to commission and build Gehry’s geometrically challenging building in Bercy was immediately met with criticism. Skeptics felt that the building’s $41 million price tag posed too much of a financial burden on the Center—whose mission is to support cultural, educational, and artistic activities. The Center’s leadership, however, gambled that the new, high-profile facility would attract renewed interest in and donations.

Unfortunately for the American Center, operating costs and growing debt forced the Center’s board of directors to close the building in January, 1996, only 19 months after it opened. The building has remained vacant since, though the French Ministry of Culture announced plans to acquire the building for $21 million in July 1998 to house the Maison du Cinema, a film library and theaters.
Links: www.galinsky.com
1,347 views