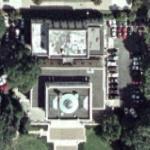 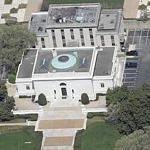 The American Pharmacists Association's headquarters building, known as the American Institute of Pharmacy, was dedicated on May 9, 1934, and its annex was added in 1960. Designed by the noted architect John Russell Pope, the structure is one of the few non-governmental buildings on Constitution Avenue. Its nearest neighbors are the U.S. State Department and the National Academy of Sciences, and it overlooks the Lincoln Memorial and the Vietnam Veterans Memorial on Washington's Mall.

Also, from the American Guide Series, Washington D.C.: A Guide to the Nation's Capital, 1968:

The American Institute of Pharmacy, headquarters and research center of the American Pharmaceutical Association...is a relatively small, shrinelike white marble building, designed by John Russell Pope and opened in 1934. Rising from a green slope above the Lincoln Memorial, the distinguished façade, lifting above a balustraded terrace, conveys a spirit of balanced charm and dignity. The central portion, with its high attic parapet, is enclosed on three sides by a series of one-story outer chambers. The paneled bronze entrance portal, with its arched, grilled transom, is flanked by allegorical bas-reliefs, the work of Ulysses Ricci—Pharmakeutike, symbolizing the progress of pharmacy, and Phos Kai Elpis, representative of Light and Hope.
Links: www.aphanet.org
1,084 views