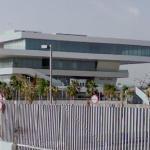 The design has won numerous architectural awards, including the 2006 Emirates Glass LEAF Award and the Royal Institute of British Architects European awards in 2007. It was also nominated for the Sterling Prize in 2007
Links: en.wikipedia.org
671 views