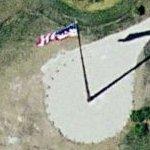 It was taken down in October 2007 with a plan to erect a stronger pole. In April 2008, a new pole went up without a flag, but it was swaying badly in low winds.

Acuity has apparently scrapped the idea of having a tall flag pole here, as the base area of the flag pole has been torn out and replaced with grass.

UPDATE - In May 2014, Acuity once again claimed the title of having the country's tallest flagpole with an improved 400 feet tall pole. It features three pendulum-style tuned mass dampers which prevent the pole from swaying and vibrating.
Links: en.wikipedia.org, archive.jsonline.com, cm.greenbaypressgazette.com, www.youtube.com
1,962 views