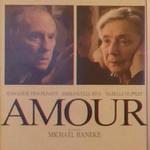 By adrbr @ 2013-02-28 17:39:35
@ 51.96695, 5.665056
Wageningen, Netherlands (NL)
Amour (pronounced: [a.muʁ]; French for "Love") is a 2012 French-language drama film written and directed by the Austrian filmmaker Michael Haneke, starring Jean-Louis Trintignant, Emmanuelle Riva and Isabelle Huppert. The narrative focuses on an elderly couple, Anne and Georges, who are retired music teachers with a daughter who lives abroad. Anne suffers a stroke which paralyses her on one side of her body. The film is a co-production between the French, German, and Austrian companies Les Films du Losange, X-Filme Creative Pool, and Wega Film.


The film was screened at the 2012 Cannes Film Festival, where it won the Palme d'Or. It won the Best Foreign Language Oscar at the 85th Academy Awards, and was nominated in four other categories: Best Picture, Best Actress in a Leading Role (Emmanuelle Riva), Best Original Screenplay (Michael Haneke) and Best Director (Michael Haneke). At the age of 85, Emmanuelle Riva is the oldest nominee for the Best Actress in a Leading Role.
Links: en.wikipedia.org
322 views