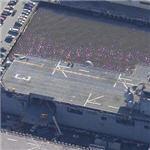 Kearsarge's keel was laid down on 9 February 1990 at Litton-Ingalls Shipbuilding Corporation of Pascagoula, Mississippi. She was launched on 26 March 1992, in a ceremony attended by then-Chairman of the Joint Chiefs of Staff Gen. Colin Powell. The warship was christened on 16 May 1992, and commissioned on 16 October 1993.
Links: en.wikipedia.org
11,937 views