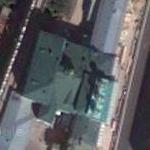 It was built in 1652 for Ilya Miloslavsky, who was the father-in-law of czar Alexei Mikhailovich. After the death of Miloslavsky, the palace went to the state. It was then used as a theatre. In the theatre performances were staged to amuse the family of the czar and his court. Hence, it got the name the Amusement Palace.

During the administration of czar Peter the Great, the Police Department was placed in the Palace. In the 19th century the Commandant of Moscow took up his residence there. The palace was restored in 2002-2004, including the original décor of its façade and the Church of our Lady’s Glorification.
Links: en.wikipedia.org
420 views