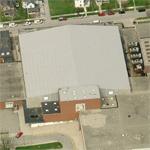 This arena replaced another which burned down in 1958. The older arena was home to the NBA's Anderson Packers in 1949-50. The Wigwam was a part-time home of the ABA's Indiana Pacers before Indianapolis' Market Square Arena was built in 1974.

Over the years, the arena has hosted concerts, political rallies, minor league basketball games, and visits by the Harlem Globetrotters.
Links: en.wikipedia.org
603 views