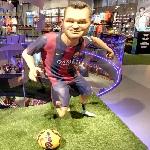 By tallturtle82 @ 2015-06-01 13:06:35
@ 41.380269, 2.120813
Esplugues De Llobregat, Spain (ES)
Andrés Iniesta (5/11/1984) is a Spanish professional footballer who plays midfield for FC Barcelona and the Spanish national team. Iniesta has spent is whole professional career at FC Barcelona, starting with the club at the age of 12. Just after arriving at Barca, then Barca midfielder Pep Guardiola told fellow midfielder, Xavi, "You're going to retire me. This lad (Iniesta) is going to retire us all." Iniesta has lived up to those expectations and then some. Andrés is considered a top five player in the world and one of the best passers and playmakers on the planet. He has won at the club level, international level and at individually.
Links: www.andresiniesta.es
508 views