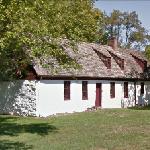 By Mike1989 @ 2013-04-01 02:23:36
@ 38.978394, -76.626681
Davidsonville, Maryland (MD), US
Anne Arundel County Free School is a historic school building at Davidsonville, Anne Arundel County, Maryland. The first Free School of Anne Arrundell County was established by an Act of the General Assembly of colonial Maryland in 1723. It was built somewhere between its contractual date of 1724 and 1746 when it was under full operation with John Wilmot as schoolmaster. The existing abandoned building is 49' x 18', and consists of six rooms on two floors. It was built "as near the center of the county as may be, and as may be the most convenient for the boarding of children." The county then included what is now Howard County. It remained in operation until 1912 when the movement toward consolidation forced the closure of many early school buildings. It is the only surviving schoolhouse erected in Maryland in response to the Maryland Free School Act of 1723.
Links: en.wikipedia.org
777 views