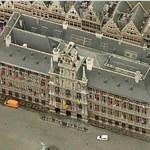 By DonMartini @ 2007-03-31 04:02:27
@ 51.221297, 4.39898
Antwerp, Belgium (BE)
Antwerp's city hall is considered the most important Renaissance building in the Low Countries. When the city council decided to build a new city hall in the 16th century, they wanted a building in gothic style, but by the time the money for the new city hall was found, renaissance had become the new architectural style.

The design by Cornelis Floris II de Vriendt was influenced heavily by Italian architecture and is a Flemish variant of Florentine palaces. The city hall was constructed between 1561 and 1565 and influenced the design of many government buildings across North and Central Europe.


The lowest floor of the city hall consists of small shops with in total 45 small entrances. The construction of the city hall was partly funded with the rent received from those shopkeepers.
Links: en.wikipedia.org
942 views