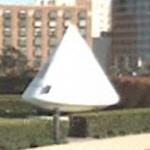 By kjfitz @ 2010-01-13 13:03:27
@ 42.966256, -85.677124
Grand Rapids, Michigan (MI), US
Command module BP-1227 was lost at sea early in 1970 as it was being used to train UK-based naval units in spacecraft recovery. Well, not exactly “lost”… a Soviet fishing trawler (or what looked to be one) lurking in the area first snagged the capsule from under American noses, then spirited it away to the communist motherland for a detailed KGB analysis. Later that year and in a climate of detente, the American Coast Guard icebreaker Southwind made an official courtesy call at the arctic port of Murmansk. To the rather large surprise of the ship’s crewman, the Red Navy dropped off a rather large surprise package: BP-1227!
Links: weburbanist.com
687 views