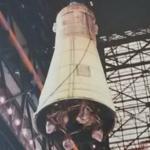 The Command/Service Module (CSM) was one of two spacecraft, along with the Lunar Module, used for the United States Apollo program which landed astronauts on the Moon. It was built for NASA by North American Aviation. It was launched by itself into suborbital and low Earth orbit test missions with the Saturn IB launch vehicle, and three times by itself and nine times with the Lunar Module as part of the Apollo spacecraft assembly on the larger Saturn V launch vehicle, which was capable of sending it to the Moon.

he Apollo Lunar Module (LM), also known as the Lunar Excursion Module (LEM), was the lander portion of the Apollo spacecraft built for the US Apollo program by Grumman to carry a crew of two from lunar orbit to the surface and back. Six such craft successfully landed on the Moon between 1969 and 1972.
Links: en.wikipedia.org
378 views