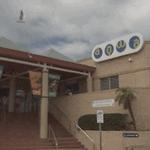 The facility is also host to a seal enclosure, "Seal Island". From 1992 to 1999 the aquarium also hosted a family of dolphins enclosed in a sea pen, which later died due to poisoning.
Links: www.aqwa.com.au
593 views