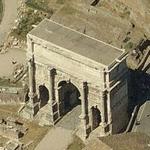 The three archways rest on piers, in front of which are detached composite columns on pedestals. Winged Victories are carved in relief in the spandrels. A staircase in the south pier leads to the top of the monument, on which were statues of the emperor and his two sons in a four-horse chariot (quadriga), accompanied by soldiers.
Links: en.wikipedia.org
1,007 views