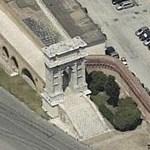 By DonMartini @ 2007-01-23 09:15:25
@ 43.625174, 13.506332
Ancona, Italy (IT)
The marble Arch of Trajan, 18 m high, was erected in 114/115 as an entrance to the causeway atop the harbor wall in honor of the emperor who had made the harbor, is one of the finest Roman monuments in the Marche. Most of its original bronze enrichments have disappeared. It stands on a high podium approached by a wide flight of steps. The archway, only 3 m wide, is flanked by pairs of fluted Corinthian columns on pedestals. An attic bears inscriptions. The format is that of the Arch of Titus in Rome, but made taller, so that the bronze figures surmounting it, of Trajan, his wife Plotina and sister Marciana, would figure as a landmark for ships approaching Rome's greatest Adriatic port.
Links: en.wikipedia.org
649 views