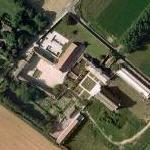 The Abbey was used as an observation post by the Germans in the Battle of Normandy, and was heavily damaged by Allied forces. As a result, much of the Abbey visible today has been rebuilt or restored. The Abbey is most notorious for being the site of a massacre of Canadian prisoners of war during World War II.
Links: en.wikipedia.org
655 views