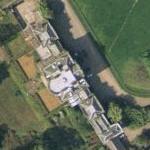 The lands of Ardgowan were given to John Stewart by his father King Robert 111 of Scotland on 5th may 1403. Robert 111 was Robert the Bruce’s great grandson and the estate has been passed down from father to son or uncle to nephew to the present day.

The first historical mention of the Castle of Ardgowan - the tower at the bottom of the garden - was in 1307. At that time the castle was an English garrison commanded by Sir Philip Mowbray. Following a battle with the Scots, Mowbray and his troops were defeated and fled into Ayrshire. There was a castle here in the days of Bruce but the present building is of a later date, probably the end of the 15th century.
Links: www.ardgowan.co.uk
1,174 views