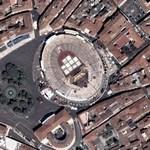 The building was built in AD 30 on a site which at the time was outside of the city walls. The ludii (shows and games) staged there were so famous that spectators came from many other (sometimes very distant) places. The amphitheatre could host more than 30,000 spectators.

The round façade was originally in white and pink limestone from Valpolicella, but after a major earthquake in 1117, which almost completely destroyed the outer ring, except the so-called "Ala", the Arena was used as a quarry for other buildings. The first interventions to recover its functionality as a theatre were started during the Renaissance.

Thanks to its outstanding acoustics, the building lends itself to musical performances, the practice of which began in 1913. Nowadays, four productions are mounted each year between June and August.
Links: www.arena.it
5,357 views