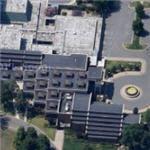 By kjfitz @ 2012-03-07 21:33:14
@ 34.738386, -92.266558
Little Rock, Arkansas (AR), US
One of the leading cultural institutions in the state, the Arkansas Arts Center is located on the corner of 9th and Commerce streets in MacArthur Park, Little Rock, Arkansas, USA. The Arkansas Arts Center was founded in 1960, but the idea began in 1914, when the Fine Arts Club of Arkansas formed. The group included supporters and volunteers who contributed to the realization of the Museum of Fine Arts in 1937 located in Little Rock's MacArthur Park. The center features a permanent collection of various works of art along with occasional special exhibitions
Links: en.wikipedia.org
726 views