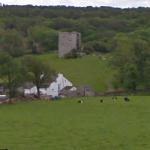 A quote from Matthew Emmott
Arnside Tower stands tall and majestic on the hill side overlooking the farm below it. Again, it's a huge structure, originally a five or six storey tower dating from around the 15th century. Arnside tower is interesting in one exceptional way and that is that it forms part of a defensive ring around the Morecambe Bay area. The other towers are at Hazelslack, another 14th century pele tower, Wraysholme tower in Allithwaite near Grange, a 15th century pele tower, and Beetham. All these towers are in pretty good condition considering their ages, although Arnside tower appears to have suffered some storm damage in the 1800s.
Originally on The Westmorland Gazette
Links: www.ecastles.co.uk
560 views