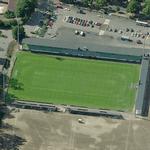 Arto Tolsa Areena was previously known as "Urheilukeskus" ("Sports Center" in Finnish). It got its current name after it was renovated around the turn of millennium. The current name comes from Arto Tolsa, who was a legendary Finnish player of Kotkan Työväen Palloilijat, the predecessor of FC KooTeePee.