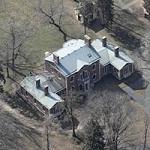 In 1806 Henry Clay acquired the first 320 acres of what would become the Ashland estate. It has been said that Col. Hart provided the funds for the purchase of the property. Later that year the central section of the house was built. The wings, designed by Benjamin Latrobe, were added by Clay in 1813-1815. The house became the focal point of the 600 acre Bluegrass farm. Henry Clay christened the farm "Ash Land" due to the great number of majestic ash trees that stood on the property.

For more than forty years, Henry Clay lived at Ashland, the place he loved best. When he was at home he could be seen frequently pacing the "Henry Clay Walk" that still runs through the trees behind the main house. Many of the great speeches which he delivered in Congress were composed along these peaceful walks.

Ashland, The Henry Clay Estate has undergone several changes since it was first developed by Henry Clay. Today the estate includes the main house, outbuildings, and a formal garden situated on a twenty-acre lot.

The mansion stands on the site of the original Ashland, home of Henry Clay from 1806 to 1852. The present Italianate style house was completed by Clay’s son James in 1857. The interior was remodeled in the Victorian style by Anne Clay McDowell, one of Clay’s granddaughters, in the 1880s.
Links: www.henryclay.org
3,232 views