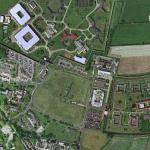 By Hinkkanen @ 2006-03-25 08:43:17
@ 53.520155, -2.908394
Maghull, United Kingdom (GB)
Ashworth is one of the three "special" hospitals in England and Wales, along with Rampton and Broadmoor, that exist to work with people who require treatment in conditions of special security due to their "dangerous, violent or criminal propensities". Ashworth was formed from the merger of the old Moss Side Hospital – originally a learning-disability unit once used for the treatment of "shell shock" in World War I – and the vastly more modern/appropriate Park Lane Hospital, opened as a Broadmoor overspill unit in the early 1970s.
Links: www.northmersey.nhs.uk
1,855 views