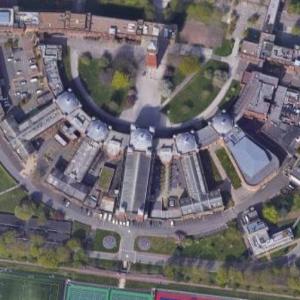 The Aston Webb building was the first building at the Edgbaston campus. It forms a semicircle to the south of the Chancellor’s Court with its clock tower ‘Old Joe’, named for the university’s first Chancellor, Joseph Chamberlain.

Sir Aston Webb received the inaugural American Institute of Architects Gold Medal in 1907. The AIA Gold Medal is awarded by the Board of Directors in recognition of an architect who has produced an extensive body of work which has shaped the theory and practice of architecture. He had previously received the Royal Gold Medal for Architecture in 1905.
Links: en.wikipedia.org, www.birmingham.ac.uk
92 views