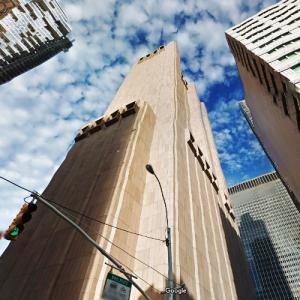 By jbottero @ 2017-06-03 21:55:28
@ 40.7165486, -74.0066604
New York, New York (NY), US
The AT&T Long Lines Building is an enormous 29 story building in Lower Manhattan that houses a telephone exchange servicing national and international telephony functions known as an international "gateway switch" which routes phone calls between locations in the United States and countries across the world. It is also said to be the the likely location of an NSA mass surveillance hub codenamed TITANPOINTE. The building was designed by the architectural firm John Carl Warnecke & Associates, whose grand vision was to create a communication nerve center like a "20th century fortress". It is windowless save a single window of unknown purpose, and has large architectural exhaust ports for backup power and other environmental services. It was completed in 1974, and exhibits the Modernist and Bauhaus influences that characterize the work of its main architect, John Carl Warnecke.
Links: www.dailymail.co.uk, theintercept.com, en.wikipedia.org, www.nytimes.com, virtualglobetrotting.com
1,639 views