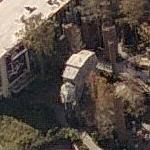 By kjfitz @ 2007-08-31 10:38:44
@ 28.355581, -81.558798
Orlando, Florida (FL), US
The All Terrain Armored Transport (AT-AT), also called the Imperial Walker, was a major part of the Galactic Empire's army in the fictional Star Wars universe. They were assembled by Kuat Drive Yards, and evolved from the previous built AT-TE Walkers and A5 Juggernaut, made for the Clone Wars. According to Star Wars creator George Lucas, the AT-AT's were based on the tripod fighting machines from The War of the Worlds. He also took inspiration from elephants and loading cranes in West Oakland--hence the nickname "elephant walker."
Links: en.wikipedia.org
5,312 views