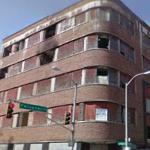 By kkeps @ 2012-02-28 15:11:26
@ 33.75382, -84.392646
Atlanta, Georgia (GA), US
The Atlanta Constitution Building, also known as the Georgia Power Atlanta Division Building, is located at the northwest corner of Alabama and Forsyth Streets in downtown Atlanta, Georgia, at 143 Alabama Street, SW. It is located in an area known as the "Heart of Atlanta" straddling the railroad gulch ("The Gulch"), "due to [its] proximity to the 'Zero Mile Post' which marked both the Southeastern terminus of the Western and Atlantic railroad and the city's earliest settlement". The former Atlanta Constitution Building was designed by Adolph Wittman and was located at the opposite corner of the intersection beginning in 1895.

The downtown building has been vacant since 1972. The building was placed on the 2003 List of Endangered Buildings by the Buildings Worth Saving Committee of the Atlanta Preservation Center.
Links: en.wikipedia.org
753 views