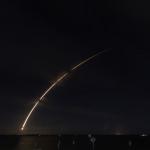 By kjfitz @ 2013-12-31 11:14:54
@ 28.206699, -80.661549
Melbourne, Florida (FL), US
Atlas is a family of United States missiles and space launch vehicles. The original Atlas missile was designed in the late 1950s and produced by the Convair Division of General Dynamics, to be used as an intercontinental ballistic missile (ICBM). It was a liquid-fuel rocket burning liquid oxygen and RP-1 in three engines configured in an unusual "stage-and-a-half" or "Parallel Staging" design: its two outboard booster engines were jettisoned during ascent, while its center sustainer engine, fuel tanks and other structural elements were retained into orbit.

The missiles saw only brief ICBM service, and the last squadron was taken off operational alert in 1965. From 1962 to 1963, Atlas boosters launched the first four American astronauts to orbit the Earth. Various Atlas II models were launched 63 times between 1991 and 2004. There were only six launches of the Atlas III, all between 2000 and 2005. The Atlas V is still in service, with launches planned until 2020.

More than 300 Atlas launches have been conducted from Cape Canaveral Air Force Station in Florida and 285 from Vandenberg Air Force Base in California.
Links: en.wikipedia.org
326 views