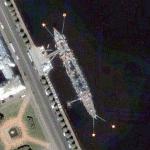 On 25 October (7 November in Gregorian calender)) 1917, a blank shot from her forecastle gun signalled the start of the attack on the Winter Palace, which was to be the first episode of the October Revolution. Since 1947 Aurora has been permanently anchored on the Neva in Leningrad (now: St. Petersburg) as a monument to the Great October Socialist Revolution and in 1957 she became a museum-ship.
Links: en.wikipedia.org
1,220 views