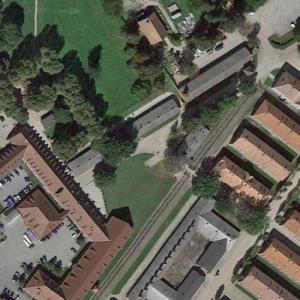 By giove @ 2010-02-10 08:13:42
@ 50.027545, 19.203511
Oświęcim, Poland (PL)
Auschwitz I was the original camp, serving as the administrative center for the whole complex. The site for the camp—16 one-story buildings—had earlier served as an army barracks. It was considered as a concentration camp site by Germany's Inspectorate for Concentration Camps in January 1940, but was deemed unsuitable. SS Captain Rudolf Höss visited the site again in April 1940, and acting on a favourable report from him, Heinrich Himmler, Germany's Minister of the Interior, ordered the camp to be built there, with Höss as its first commandant.

The 5-metre (16 ft), 41-kilogram (90 lb) wrought-iron "Arbeit macht frei" sign over the entrance to Auschwitz I was stolen in the early morning of December 18, 2009. The thieves unscrewed the sign at one end and broke it off its mountings at the other end, then carried the sign 300 metres to a hole in the concrete wall, where they cut four metal bars blocking the opening. Police found the sign, cut into three parts, in northern Poland two days later in the home of one of five men who were arrested. An unnamed overseas buyer is believed to have been involved.[ Polish police said that the five were common thieves, not neo-Nazis. The original sign will be welded back together and put back up after an improved security system is put in place.
Links: en.wikipedia.org
13,277 views