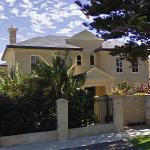 Police said on Saturday there were no suspicious circumstances surrounding the death of the 57-year-old woman, now known to be Diana Bilss.

A police spokeswoman said they received a call about the death from St John Ambulance officers at about 1130 WST on Saturday.

The body is suspected to have been found in the property's swimming pool, Perth Now reports.

Friends of Ms Bliss told the news website she had lost weight recently while a resident in the street reportedly said she had been in hospital for seven days recently.

Police attended the scene on Saturday and a coroner's vehicle that left the house is believed to have carried away the woman's body.

Police would conduct an inquiry for the coroner, the police spokeswoman said.

Mr Bond could not be contacted for comment but Sue Parks, a publicist for the Bond family, had said the family did not want to make any statement at this stage.

The 73-year-old, linked to one of the biggest corporate collapses in Australian history, was declared bankrupt in 1992 and in 1997 was sentenced to four years in jail for fraud.
Links: en.wikipedia.org, www.news.com.au, www.dailymail.co.uk
1,210 views