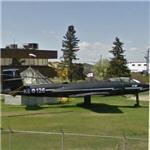 The CF-100 is not considered to be truly supersonic since it could not exceed the speed of sound in level flight. However, on 18 December 1952, S/L Janusz Żurakowski, the Avro company chief development test pilot, broke the sound barrier flying the CF-100 Mk 4 prototype in a dive from 30,000 feet.
Links: en.wikipedia.org
651 views