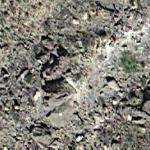 The giant bomber was flying in a NNE heading at an altitude of about 5200 feet when its right wing made contact with the mountain. The fuselage and left wing continued in the NNE heading across a ravine, slamming into a wall of solid rock on the other side.

Two pieces of the B-36 can be seen in the thumbnail, both from the right wing: one of the plane's jet engines (the white object at bottom center) and one of the main landing gears (the long shadow at top right). This photo shows the same scene from ground level: http://images.summitpost.org/original/457596.JPG
The left landing gear, not visible in the thumbnail, can be seen about 120 yards (111 meters) north of the jet engine just to the left of the terminal wall. There are many thousands of other pieces of the B-36 still on the mountain overlooking the West Side of El Paso, ranging in size from the three pieces mentioned above to tiny ones a few millimeters across or less.

The pilot and four of the crew who died in this crash had been involved in an earlier incident in England: They had flown a B-36 across the Atlantic but were unable to land at their intended destination due to fog, ran low on fuel, and, unbelievably, parachuted to safety, allowing the huge plane to fly unmanned for 30 minutes over the English countryside before crashing into a field without harm to human life. The British were understandably upset.
Links: www.internationalnaturalhistoryleague.com
4,178 views

Anonymous
@ 2017-02-03 03:41:01
My name is Barbara and I remember this plane crash, when I was 2 1/2 years of age. My parents, James & Marjorie Woods, along with my grandparents Dunklin & Eudora Robinson, we're planing to go 'up to the mountain and see the plane crash.' Instinctively I realized the seriousness of this even as a young child. Barbara A. Woods McLure