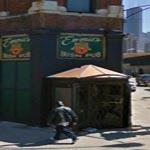 
Emmits Irish Pub in Chicago, Ill. was featured in the movie after Brian McCaffrey (William Baldwin) graduates from the fire academy.

Besides Backdraft,Emmits has been seen in some films that include, Uncle Buck, Only the Lonely, Blink, two episodes of the Untouchables,Oceans Eleven, Oceans Twelve, U.S. Marshalls, Eagle Eye and Overcoat. Some TV shows include the CBS weekly drama Turks, Early Edition, the Beast and a few Playboy Shoots as well.
Links: www.imdb.com
1,946 views