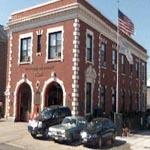 This Chicago fire station was the setting of the main fire station used throughout the film,and is actually home of the brave men and women of engine company 65 & 52.
Links: www.imdb.com, www.youtube.com
1,581 views