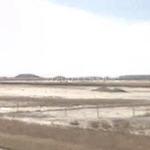 The Badlands Wilderness protects 64,144 acres (25,958 ha) of the park as a designated wilderness area and is the site of the reintroduction of the black-footed ferret, the most endangered land mammal in North America.

The Stronghold Unit is co-managed with the Oglala Lakota tribe and includes sites of 1890s Ghost Dances, a former United States Air Force bomb and gunnery range, and Red Shirt Table, the park's highest point at 3,340 feet (1,020 m). Authorized as Badlands National Monument on March 4, 1929, it was not established until January 25, 1939. Under the Mission 66 plan, the Ben Reifel Visitor Center was constructed for the monument in 1957-58.

It was redesignated a national park on November 10, 1978. The park also administers the nearby Minuteman Missile National Historic Site.
Links: virtualglobetrotting.com, en.wikipedia.org
1,230 views