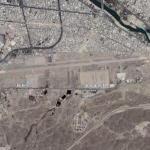 In a report conducted by John Shields in 1996, he found that the Iran Aircraft Industries maintained major aircraft repair, overhaul, and manufacturing facilities at the Esfahan base. For instance, the Iran-140 is produced at the base. The IAI is supported by aerospace R&D from the University of Esfahan, which had designed most of Iran's RPV's (as of 1989).
Links: www.globalsecurity.org
1,631 views