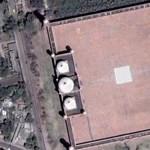 Capable of accommodating over 55,000 worshippers, it is the second largest mosque in Pakistan, after the Faisal Mosque in Islamabad. The architecture and design of the Badshahi Masjid is closely related to the Jama Masjid in Delhi, India, which was built in 1648 by Aurangzeb's father and predecessor, emperor Shah Jahan.

Badshahi Masjid is one of the famous locations where Qari Basit recited quran.
Links: en.wikipedia.org
1,673 views