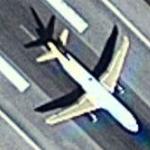 Bahamasair was born out of crisis as British Airways decided to cancel its services to the Bahamas due to the oil crisis of the 1970's.
Links: www.bahamasair.com
915 views