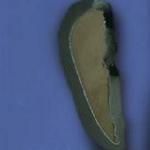 It once had a small but well established fishing village named Tigres. Aided by rising sea levels, the ocean broke through the isthmus of the peninsula in the 1970′s the water line was severed. Tigres became an Island overnight with no water supply, Tigres and the pump station at the Cunene river mouth were abandoned, and have become ghost towns slowly being reclaimed by the desert.
Links: en.wikipedia.org, en.wikipedia.org
388 views